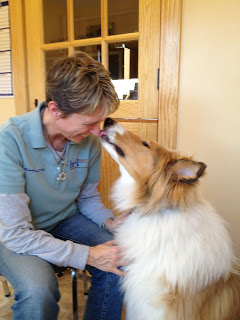 One of the most common patterns seen when the mammalian body corrects or cures itself of problems is a “revisit” of earlier symptoms.  Such was the case with Blaze.  After his Lyme diagnosis, his acute fever and lameness resolved with homeopathic treatment.  He then had a return of his upper respiratory symptoms and itchy rash from his early puppyhood.  The rash had shown up after a Rabies vaccine prior to his Lyme diagnosis.  It “went away” after his loving and dedicated owner, Deb, gave him treatment with Aloe ointment, GoldBond powder, and a combination homeopathic remedy.  Likely it was suppressed, not cured.  There is a big difference  This is a good place to make a point that may surprise you.
Homeopathy is not benign.  It can suppress and palliate just like conventional meds.  These reactions are getting rid of the symptoms by covering them up, like bailing out that boat without ever getting to the hole leaking at the bottom.  It is HOW homeopathy is applied that offers the option to use it to stimulate the body to CURE.  That’s why it is worthwhile to contact an experienced practitioner for chronic disease problems.  And it’s important to recognize that problems that seem to flare up “acutely” every so often, like ear infections, itchy skin, and diarrhoea are actually chronic diseases that are present at all times.  They just lie invisibly latent, or dormant, for long periods in between flare ups that you can then see.
For Blaze, he showed the pattern typical of palliation.  The problem returned with a vengeance.  His rash recurred much worse and had spread quickly to his scrotum, swelling it to 2 or 3 times its normal size.  The photo below shows the swelling all the way up to his abdomen and the deep red inflammation of the surrounding skin. 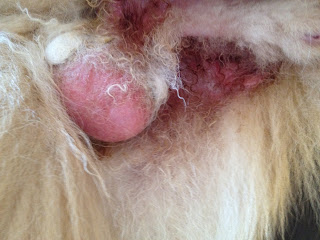 After further homeopathic treatment with a curative response the pathological activity was corrected and the swelling and redness resolved.  It will likely not return. 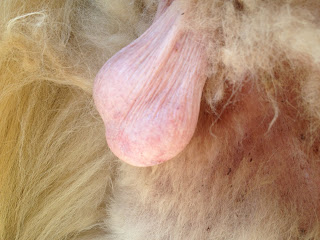 The difference is easy to see.  And, as I’m sure you can imagine, it was a great relief for Blaze!  Soon other early puppyhood symptoms recurred.  They resolved on their own after a brief flare up, without any further treatment – belching, sneezing, urinary incontinence, and lipfold pyoderma (infection).  That brings us to October 31, 2012.  Blaze had some stains and matted hair developing between his toes, belching and sneezing again.  After investigating any changes in diet, I uncovered the fact that Deb was using a treat for Blaze in training that was not grain-free.  Being the very active and generous trainer that she is, Deb was giving a lot of these treats.  It was too much for Blaze.  Many dogs, cats, and people can tolerate grains in their diets, but most cannot.  Blaze is one of those who are highly sensitive.  The red staining of the coat (between the toes) was a big tip off.  Deb changed the treats and a (hopefully) final dose of Blaze’s constitutional homeopathic drug (remedy) – Pulsatilla nigricans 50M, was given.
I am so happy to report as of the time of this writing Blaze is doing very well with no problems reported!  It’s been a real pleasure and an honor to be a part of his journey.  He and Deb are now preparing for their Therapy Dog certification test.  Wish them good luck! 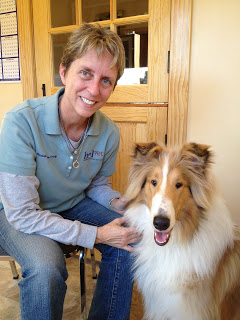 Using a holistic approach, she has had remarkable success treating cancer, diabetes, behavioral problems, and many other chronic disease issues, mostly