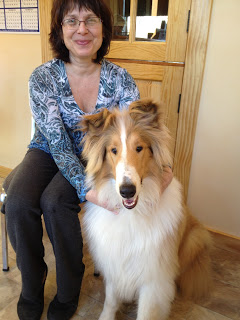 A local (Ulster County, Hudson Valley, New York State) dog has been cured of Lyme Disease this month exclusively with homeopathic treatment.  I have long claimed that treating Lyme disease is relatively safe, simple, and easy for a trained homeopath.  This is a classic case with classic symptoms and classic response to homeopathy.

Blaze is a gorgeous, intact, nine month old, male Collie (don’t they both look great?  And happy!).  Debi found an engorged tick (deer tick?) on her floor Wednesday, Feb 8, 2012.  He started limping on his right front, with a slightly swollen paw on Friday.  He was also mildly lethargic and mildly anorexic, and seemed to be breathing a little faster.  He had a fever of 102.3 (normal is 100-102).  His very thoughtful owner was willing to wait on conventional treatment for palliation to attempt a true cure by homeopathy.

I took Blaze’s case by phone consultation and his treatment was started with Ledum pallustre 30 in multiple aqueous doses.  He showed no response, and was slightly worse the next morning with swelling advancing to his carpus (wrist) in his Right front, and the lameness spreading to his left hind as well.  Several aquesous doses of Ledum pallustre 200c were given on Saturday.  The next afternoon he and his owner attended a local lecture I was giving on how to do a physical exam to your own pets and he was very much improved.  He was bright and bouncy!  His temperature was down to 101.6.  His lameness was reduced, and his energy was great.  The original, early symptom of the swelling in the paw was improved.

The following day, Monday, his fever again spiked to 102.3.  With continued improvement in his specific and general symptoms this indicated an appropriate immune response to the infective challenge.  Treatment was completed with several doses of Ledum pallustre 1M.

Today, 1 week from the onset of illness, Blaze is completely free of his troublesome symptoms.  He has had a return of old symptoms that flared up first after vaccines months ago.  This is a common pattern of curative response to homeopathy.  He has been stimulated to correct his pathology, and once the newest problem had been resolved he started working on older, “deeper set” pathology.

We are now waiting and observing to see if Blaze has had sufficient stimulation to correct the old, unhealthy chemistry (itchy skin, runny eyes, and sneezing – the exact same pattern as right after his second “puppy series” distemper vaccine) without further treatment.  In the meantime, he is enjoying life!

This case illustrates several great points.  One – Ledum is the classic remedy to start (and often finish) a true Lyme disease case.  However, it could have easily been missed if higher potencies had not been tried after the 30c failed.  Two – This case illustrates how successfully homeopathy can be practiced by phone consultation.  Three – This client was well educated in homeopathic principles and therefore had the courage to sit and wait while her little loved one worked on his issue.  Many other dog owners would have succumed to palliating with conventional drugs, which can palliate quite well.  Five – Having cured with homeopathy instead of palliated with conventional drugs, Blaze is now healthier than he was just before the tick infected him.  He is now cleaning out some dysfunctional chemistry (vaccinosis) he got stuck with after his early vaccines.  Lets wish him continued good luck.

Using a holistic approach, she has had remarkable success treating cancer, diabetes, behavioral problems, and many other chronic disease issues, mostly