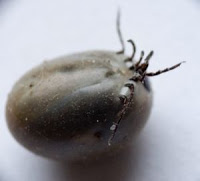 I have two poodles in my family who enjoy spending quite a bit of time outside in this beautiful weather (you can learn a bit more about Bijou and Janvi by taking a peek at my Facebook account, if you’re so inclined). Running around in the woods within our invisible fence, they have plenty of opportunity to bring home unwelcome friends, especially ticks. Now I’m a veterinarian, and I know that ticks function very much like slow-acting mosquitoes, but it’s still pretty disgusting finding a bunch of those engorged buggers on my boys.
Enter Buck Mountain Botanicals, the formulator of the amazing cancer drug Neoplasene. They have a product called Parasite Dust for Animals, which is a combination of three ingredients (neem herb, yarrow, and diatom flour) and a triple threat for external parasites. As described in the clinical guide:

I pulled a few bloated ticks off of my poodle Bijou this morning and Terence poured a small amount of the dust on them as an experiment. Their little legs, which had been slowly wriggling, stopped moving within seconds. I’ve been told that this product even works on embedded parasites like scabies and mange, and I’m inclined to agree!