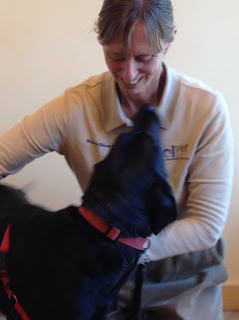 This is a very grateful, wiggly Arden, now just 4 years old.  We could hardly get her to pose for the photo!  Her recheck yesterday was stellar, reporting just one, very mild seizure in the past 10 months.  Her pretreatment frequency was every 2-12 weeks!  That blur you see under my arm is her tail wagging furiously.  She is still calmer, less frenetic than pretreatment and was doing well in general.  She is near the end of her healing.

It is exceptional that a patient afflicted to a severe degree with a serious problem like epilepsy, become cured in just three doses of one homeopathic remedy, but it does happen.  And, perhaps it has for Arden.  Only time will tell.

She was treated for Lyme disease recently by the local, conventional veterinarian she sees for routine matters, after testing positive with the standard Lyme test.  It is unlikely she had Lyme disease.  Her lameness at the time of the appointment was in a leg with a chronic limp, a cartilage injury I suspect.  Note that this test is for antibodies, the stuff we all make after exposure to a noxious thing.  Since Arden tested positive years ago she will likely always test positive, even though she likely does not have the disease.  In fact, she possible never had the disease.  For more information see my article on my website www.holvet.net titled Your Dog Does Not Have Lyme at https://www.holvet.net/lyme.html.

I have given Arden a two part treatment to triage her state.  First, she has gotten a homeopathic drug for her lameness.  It is actually a remedy made from poison ivy.  Few folks know that poison ivy will weaken ligaments and make joints sore in addition to creating the infamous itchiness.  As a homeopathic preparation it acts much like a perfected vaccine to stimulate an individual to correct a lameness (or itchiness, etc).  The second remedy will be a repeat of her original one, in a higher potency.  I am hopeful that it will be her last as it stimulates her to make her corrections permanent and erase all tendencies toward seizures.  Keep rooting her on.