Wonton’s progression to cure continues.  It seems Wonton’s seizures are responding well, with only one seizure noted this month.  It is the longest he has ever gone between seizure episodes (six months!) since they started when he was two years old.  It was mild and short.  His new homeopathic prescription was started in late October (see blog post, Part 7).  He improved greatly.  His itchiness of his face, paws, and ears was dramatically reduced as was the redness/ inflammation in his skin.  His personality became even brighter.  Great!

He has also had a new wrinkle (couldn’t resist the pun!) in his health.  Wonton had two separate incidents of collapse or difficulty/hesitation on jumping/sitting.  It was not definitively diagnosed but it is not uncommon for Pugs to have spinal troubles affecting the nerves and/or muscles of the legs.  He recovered well without intervention. 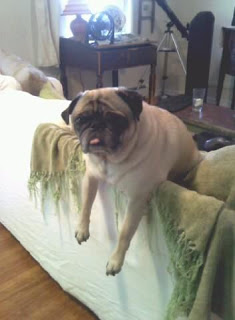 His improvement in his skin health has faded and he has finally had another seizure.  My assessment is that the remedy is stimulating a curative, homeostatic, or corrective response, but the interval between treatments has been too long.  So, onto the next higher potency, or strength of the same remedy.

This is a good illustration of the need to proceed in a timely fashion in constitutional homeopathic treatment.  When too much time lapses between points of stimulation in treatment the body tends to slide down that slippery slope back to its familiar chemistry of pathology.  It’s a bit like weeding a garden.  If the job is unfinished and some roots of the problem remain, they will slowly return.  Wonton has not lost too much momentum so I expect a full and uneventful return to progression of cure.  His next check-in will be within two months.

Arden, on the other hand, is overdue for his six month recheck, however, his owner reported in late October that he is still happily symptom/seizure free.  This is now a full year of no seizures, which had bothered him every two to twelve weeks, for most of his young life.  He has accomplished this on three single doses of one homeopathic drug.  I suspect at this point he may well be cured as defined by homeopathic standards.  That is to say, he is symptom free, and the chemistry/physiology that created the problem in the first place is likely permanently corrected.  He is not likely to ever have another seizure.  He is much healthier than he was before treatment, and he has likely added to his lifespan.  I expect him to live months or years longer than he would have without treatment.

I’ve been a homepath well over two decades now and results like this never cease to amaze me.  I’m lucky to witness and be awed by what homeopathy is able to do.