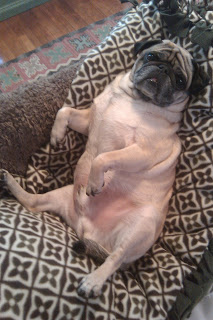 Wonton had his eighth appointment today.  He remains seizure free for the past 11 wks!  His skin is still a very significant issue and so I’m concluding that his original, and only remedy thus far has stimulated only a partially curative response.  A fabulous partially curative response, for which we are very grateful, but partial none the less.  We have unfinished business.  So the remedy has been changed to match the current symptom picture, ie., the entire group of all the new, active symptoms, as well as the symptoms from the history.

In cases that respond well to homeopathy we often see this reversal of problems.  They sometimes show up very obviously in the reverse order of how they first appeared.  Wonton had rather severe dermatological issues months or years prior to the seizures.  In fact, suppressing the skin problems may have contributed to the expression of the seizures.  Now we have a chance to heal the “bad chemistry” rather than drive it deeper.  It is likely that treating the skin with suppressive medications would bring back the seizures.  We are looking for a true cure here, and Wonton’s wonderful owners are being very patient and dedicated to make this happen.

I feel confident about the case and hope to see Wonton resolve some of his skin issues quickly so he can have some fast comfort.